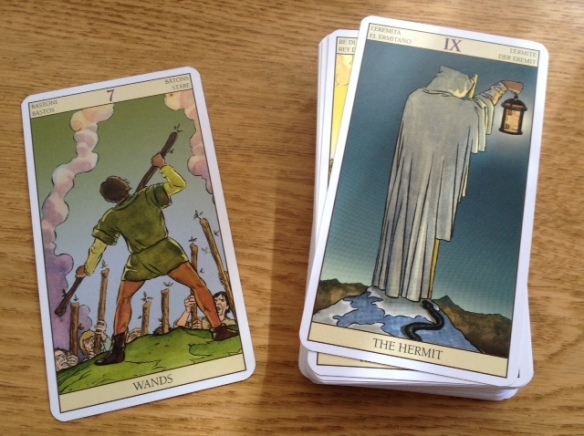 Tarot of the New Vision

Strange cards to pull for what are we leaving behind with the Scorpio Eclipse.
Pulled these just before I read there has been a quake off the coast of Japan.
Eclipse in water sign of Scorpio – this is known to happen at times.
Typically, water sign eclipses are associated with water events, but since Pluto (in Cap) is Lord of the upcoming Scorp Eclipse while in mutual reception with Saturn (in Scorp), an earth/water event.

END_OF_DOCUMENT_TOKEN_TO_BE_REPLACED

1, 5, 9 are the personal houses
1 – physical body, style of competition
5 – love and expression
9 – spirit in human experience

“I created this work for the means of an interface to the people who are yet to know of the extremely grave, but present problem of the world.” ~ Japanese artist Isao HASHIMOTO
Each nation gets a blip and a flashing dot on the map whenever they detonate a nuclear weapon, with a running tally kept on the top and bottom bars of the screen.

Tonight’s sky… three planets are at the 29th degree, the degree of saturation, culmination.

Saturn is Earth- presently on the scales of Libra (cooperation), soon moving under the scrutiny of powerful Scorpio.

Please join me in dark moon blessing for our Mother Earth and all Earthkind.
We depend on Gaia, we must defend her as well.

The New Moon is Monday in Aquarius.
Visualize, initiate and manifest changes that will heal.

New Moon in Aquarius is an electric, magnetic vibe

Moon rules the public.
All one.

As our Moon and our blessings grow to full ~ our collective thought energies will create change.

Last night I was reading tarot in bed and pulled all four Aces.  Now that doesn’t happen everyday, has only happened to me once that I can remember, in my readings for myself.  I have been reading tarot for 27 years.

I learn the most by reading for myself and seeing how the cards play out in my life.  I find it the best way to be exact in readings with others because I am so familiar with the energies on a personal level.

Last nights reading reminded me of an old friend of mine that had kids…I stayed with them for awhile in between living arrangements.  Her boys were young – squirming in their chairs, slurping noodles, making faces, and rocking back in their seats.  I often heard her exclaim, “Four on the floor !” meaning chair legs down, sit still and eat now !

Steady as she goes, Captain.

All four Aces will bring fresh new creative energies in all phases of life.
Aces are the pure, raw, initial outgoing energy of the suit – Cardinal energy !  New things are on their way… !

Reading tarot is like reading natal charts – identify the predominant energies, and how are they operating and where.  Tarot card placement in a spread is just as important as planetary placements.  How do the cards blend, how do the planets work together..?

Once I was astonished at the number of wands in my spread, almost all of them were.   Soon thereafter, I had news that brought on a bit of a panic.  (Luckily, wands energy moves quickly, it soon passed.)

One sad day before work, I drew the Death card covered by the Empress.  I went to work only to have my boss tell me a good friend had died.  I knew the couple and was close friends with them both, and their kids.   I drew a card to help comfort my girlfriend after her husband had passed – a message from him, if he could – and pulled the 2 of Cups.  That was so perfect, and tarot is right on the money, just like astrology.

The Page of Wands means a good message – incoming or outgoing depending on the placement in the spread.

Right before my lunch, I drew the Ace of Wands in the final card position.
Creative energy !
Now made manifest !

A friend of mine recently asked her girlfriends on fb to list their girl crushes, as she didn’t have any.  I couldn’t think of any either – not any recent ones anyway. Chrissie, Joni, and the Wilson sisters..?  Well, that’s been going on for years…
Now, usually when it comes to my Venus Jupiter conjunction in Leo (love and heaps of it, especially for the creative arts) square (creative tension)  Neptune (music, film and illusion), if you ask me about crushes, I’m gonna ask, “How much time ya got ?!”  haha  (You can sift through the entries on here for the scruffy dudes if you really want to know.)

Venus square Neptune..?  It’s the escape, the other world, the dream life blooming inside my head.  I feed my imagination every chance I get.  It’s a waking meditation which allows intuitive sparks from my Mars in Sagittarius quintile Uranus to light me up !

Today a friend posted a Zooey Deschanel video, and I remembered: I have already mentioned Emmylou, (click) – she was one of my very first posts) then Patricia, now Zooey.  So I guess I have 3 recent girlcrushes, if you can call it that.  I like their work, voices, talent, their art.  It’s synastry somewhere between us that brings out my curiosity, I will follow their work.

Zooey has loads of Mystical Sea Goat all conjunct her Capricorn Ascendant.
Zooey is a triple Capricorn.
Sun, Part of Fortune in 1st, Mercury spot on Ascendant, and Moon in 12th – all within 6 degrees.  (click here for another triple capricorn)

Planets conjunct the angles are stronger, and with both the luminaries conjunct her Ascendant, Zooey has presence !

Zooey has Venus exalted in Pisces quintile (genius talents- gifts of spirit) Neptune in Sagittarius !
These are the planets of the arts, and any aspect between them denotes an artist.  Venus, is the earthbound cultivated artist and personal love.  Neptune is the inspired artist, being in tune with the universe, cosmic love.  Zooey’s Venus and Neptune are both in visionary signs : I see (Sagittarius),  I believe (Pisces).

Her Capricorn stellium at the Ascendant is trine Saturn in Virgo.  Moon and Mercury are also trine Mars in Virgo (which is conjunct Jupiter).  Fair to say she is most likely a very hard worker, and organized with all that Virgo.

Uranus is at the Scorpio Midheaven in 10th showing the public she is a bit quirky and inventive with her talents, needs to switch it up a bit in career.   She is multi-talented and takes on many different projects – movies, music and she recently launched a website HelloGiggles (click).

North Node of Destiny at 29 degrees of Leo is a culmination degree in the sign of creativity.  Pluto in (Venus-ruled) Libra 9th, square Sun, Moon and Mercury, and Zooey is a powerhouse communicator through her artwork.

Venus (love, art) is cozing right up onto Pluto’s (sex, morph) lap in Capricorn (earth, clay !) & they are in a grand earth trine with Jupiter (it ahem, expands) in sensual Taurus, and Mars (desire) is in Virgo (the Virgin ha, yeah right !) and ummm, earthy signs, are well… e a r t h y

Venus, the planet of love, art, money and women has entered the cardinal (taking action) earth sign of Capricorn, the practical sign of long-term achievement, building, and success.
She is trine Mars and Jupiter; energy and faith, hope.

Venus in Capricorn highlights not only love, art and women, but also money and how WE USE (Capricorns motto) all of these in our world…in our climb to reach personal and monetary success.  What symbolizes success to you ?

Venus here brings kindness, skill building, responsibility to our energy of love, money and women. She teaches us to bend instead of break.  She reminds us that quiet stillness of prayer or meditation is best done from the vantage point of humility; the bended knees.  (Capricorn rules the knees.)  She teaches us balance and harmony in relationships with each other, and diplomacy regarding money.  She delivers options, and sees all sides.

Where do you find a hand to hold yours in the world of female power, where do you find long-term female support, who has your back…?    YOU DO.  Demi Moore recently posted a photo of her back in her bathroom mirror with the reference ‘you always have your own back’.  This is so true, be your own strength, your own rock.

Venus rules Taurus – what we own- Venus is presently conjunct Plutonian power, that is what others own- Scorpio territory.  Are you revising (Mercury is Rx now) and revisioning your feminine power and where the coiled snake rises from within yourself…? What power do you guard for yourself, and what do you give away for the sake of love or money or vanity ?

The first law of thermodynamics is energy can not be created or destroyed, it only changes form.  Where is your Venusian energy placed and how is it phoenixing for you..?  Are you digging deep and going quiet between the recent partial solar eclipse on the 25th, and the total lunar eclipse on December 10th ?

The seeds are sprouting in the garden of your life, it is just after the new moon, tend your thoughts and be kind to yourself, be your own rock of Gibraltar.  Tend to the creative thought, be loving and re-define what is long-term success, streamline and begin again.

This is turtle wisdom.