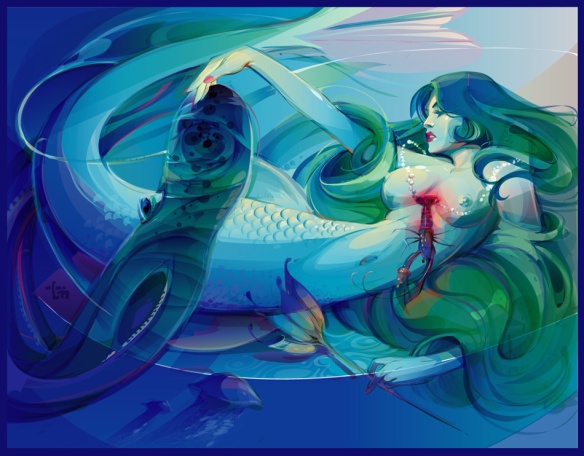 Venus into Sagittarius until December 10

The Octaves of creativity, love and devotion are on the move while in (out of sign) square to one another.  Venus in late Scorpio (until 1:03pm, Chicago) is intensely saturated with transformative power while Neptune is released from retrograde navel gazing.

Water to water – emotions run their courses.  Venus is personal transcendence and metamorphosis extraordinaire while in Scorpio.  Struggles of love/art control/desire, what is mine/ours run still waters deep, in dark secret.  Expansion has been put on hold for inward metamorphosis called strongest.  (Square Jupiter)

Lady love crossing the threshold into Sagittarius brings freedom, exploration and a much more optimistic vibration.  Neptune stations direct opposite Virgo Moon, a tidal swell of thoughts/emotions/instincts via another/public are likely.  Glean insights, move on … Moon will pass quickly.

Venus and Neptune meet up in Pisces (with Mars/Chiron) late January.

Neptune is illusion, fog and dreams, the ocean ~ fluctuation on a grand scale.

She has been getting zapped in a fixed electrical sign since August 24th, 1998.
Neptune will, at long last, enter Pisces, the sign she rules, on February 3, 2012.

South Node indicates the past life, or the road previously travelled.
It is called Ketu- the dragon’s tail- and is likened to a valley.

North Node is the trail we are currently blazing in this life.
It is called Rahu- the dragon’s head- and is likened to a peak.

North Node at the time of last nights eclipse was in the 4th house indicating
Karmic Balancing.

North Node placed in the 4th house means the energy is used to do whatever is needed and ordered by the other trinity of nodal point groups.  The 4th, 8th, and 12th houses are the Trinity of Psychicism.

The Trinity of Life.
North Node in 1st, 5th or 9th is the redistribution network, intellectual and creative growth.

The Trinity of Wealth.
North Node in 2nd, 6th, or 10th is responsible for material structures on the material plane.

Mine is in Aries, 4th. Polarities girl learns a life of balance, not too surprising.
If you would like to know where your Lunar Nodes are located, click here and enter your birth info.

Hello lovely people~
Today’s reading features the Phantasmagoric Theater Tarot deck by Graham Cameron.
One card draw to determine the best possible energies to vibe as we enter the times ahead.  Intent being the most benevolent outcome for all of us.

When I say times ahead, I am speaking of Neptune direct on the 9th.

I sense a big spiritual vibe here: what’s mine, yours and ours as the collective tribe.

Mars in Virgo puts super-efficient power behind the healing vibe, Neptune and Chiron the same on a cosmic scale.
Virgo sees the details – what needs to be done – and Neptune senses it.
Taurus (full moon) is Venus (love) ruled, and Neptune is the higher octave of Venus.  Neptune is the lightbearer for the spiritual sun.  Personal love transcendent – a love and respect for all fellow earthkind.

How apt I drew cups/ emotions/ the lunar principle/ and the fluctuation and balance of 2…  Look to Taurus (mine) and Scorpio (ours)  in your chart – these opposing houses are where you will be seeking – and finding balance.
Full moon illumination is imminent !

Wednesday November 9 at 12:54 pm, CST USA…
Neptune goes direct ~ >
turning to head back home to Pisces  ~>  WaaHoOoo YiPpiE !
There is light at the end of the tunnel for Pisces + Neptune peeps !
Hallelujah,  AMEN !

Direct motion begins at 28 degrees of Aquarius.
Neptune will drift ashore in Pisces on February 3, 2012.

I felt such a powerful whoosh when Neptune was back in sign this summer.
Water on Water feels much better than Water Electrified.

Check 28 degrees in the house of Aquarius in your chart, for when Neptune goes direct, you will feel a shift in perspective  ~> an outward manifestation of dreams and visions cultivated during June to November in that house.