Quicksilver retrograde runaround:
Mercury into Aquarius Jan 4, (in shadow 6th) retrograde at 17 degrees on the 21, direct on Feb 11 at 1 degree Aquarius (out of shadow March 4)

Quicksilver was fathered by Magneto – brill, yeah ?
Mercury is the lower octave of Uranus aka magnetics.

Mercury retrograde in Aquarius is particularly weird because perceptions of space-time are skewed – shifting and changing like prismatic flashes in a crystal prism.  Thoughts emerge from odd spectrums.  Waves and vibrations flare – deliver clarity – then fade, for another idea has already taken its place.

Accept the intuitive leaps and inventions your synapses are firing across the chasms.
The greek root of synapse means join together.

Track patterns, note insights !
Full Leo Moon opposite Aquarius Sun is delivering heaps of creative brainstorms with Jupiter Rx in tow.  Mercury Rx in Aquarius is ahead of its time & ahead of your time.  Messages incoming may not make sense at this moment – but do not idly dismiss them – they will make perfect sense in the future.

Pisces Moon nearing Void at 19″ 27′, subscribers see calendar.  Deets on how you can get Gneiss Moon 2015 astro cal here.

Today’s questions:
1 – Best Pisces Moon emo focus for most positive growth. (above)
2 – How to best ground Pluto in Capricorn, our singular earth energy. (below)

Combustion
Kundalini flare.  Pisces influence comes in waves, particularly with Moon waxing.
Sensitivities hightened by Aquarius energy Sun/Mercury/Venus opposing Jupiter in Leo, shifts in the balance between inspiration and the lower and higher mind (Mercury and Jupiter both Rx).

Actions of another are lighting fuses in houses Aquarius and Leo.

Combustion is short-lived.
Hair trigger actions will and do happen with Uranian energy buzzing – these shifts of perspective need to happen for they are signposts to insights we don’t normally see or feel.  Fog lifts…
We SEE what needs to change.
Acknowledge, accept, acclimate.

Know what you are setting fire to before you light the match.
Have patience. Think twice.

Grounding Pluto via patience and empathy – for self & others.
Differing agendas, experiences, leads to differing perspectives.
Communication from the heart coupled with patience. 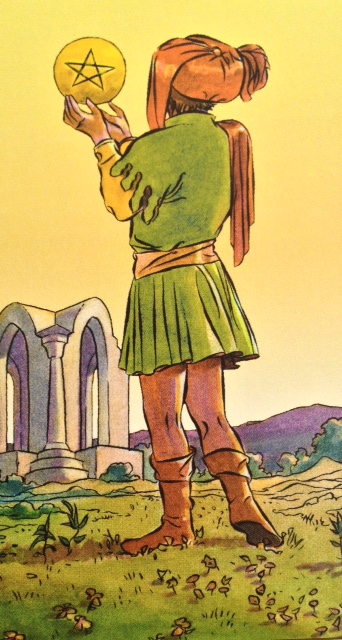 Tarot of the New Vision

Two card draw reflecting Mercurial Meanderings.
1 What we are unable to see going in…
2 That which will become clear after Nov 10

What we are unable to see is the creative work behind the Knave of Pents.
He is Earth of Earth, Malkuth (kingdom), study and learning
He is Manifestation Man, the perpetual student teacher who gets things done, patiently building and making material progress.  Outgoing messages surrounding $$ matters are the keynotes of persistent hard work.  Realistic goal sets that will climb in increments as new tools emerge to aid in the task. 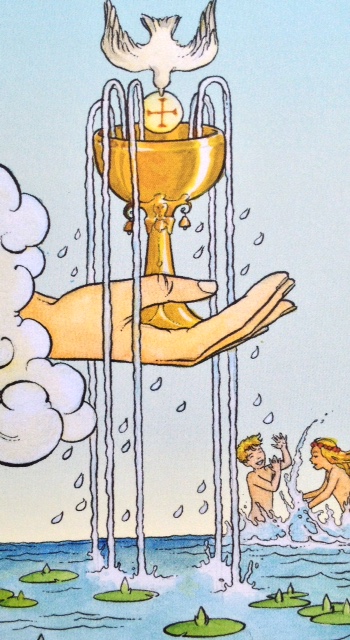 Emotional clarity and opportunities for new enterprises in love and partnership abound after Mercury moves out of shadow.  Creativity blossoms, relationships flourish and social life is once again pleasant and peaceful.  The gifts of purity of heart and spirit.
Friendship and cooperation with the creative divine source.
Going with/being the Flow.

Mercury goes Retrograde November 24 at 20 degrees of Sagittarius, direct on December 12 at 4 degrees of Sagittarius.
Retrograde is when the planet in question appears to go backwards from the vantage point of the earth.
It is a time to re-consider, re-evaluate, re-invent all things written, spoken, thought or travelled in the previous Mercury cycle.  It is a time of slowing the outgoing messages and increasing the intake, a time of review, and revision.

I love this image, and have used it before — so he may just be my Mercury retrograde ‘go to guy’, many thanks to Andy Park, illustrator.

Ok, now down to the nitty gritty of this retrograde regarding communication in the sign of far reaching vision, Sagittarius.
Every chart has a theme, a central point that is the emphasis of the life or event in question.

This eclipse chart emphasis points to a change in direction revolving around the central theme of communication – both personally and globally.  As I mentioned in this post, the eclipse can be felt leading up to and for many months afterward as planets make aspects to the eclipse point.

I graduated with a communications degree and incidents of late have me concerned to say the least.

I have Mercury (communication) in Libra (sign of balance) at MC or midheaven at the top (peak experience) of my chart, I am a 9th house (natural house of Sagittarius and visionary higher learning and study) Virgo Sun (Mercury rules Virgo) conjunct wildcard Uranus and metamorphosis Pluto.

Personal back story : I grew up on a rural route with a party line phone.  That means several houses on my road shared the same phone number, but each house had a different ring indicating who was being dialed.  Anyone on the line could pick up and listen, but politeness (Jupiter and Venus ruled and are conjunct in my chart) dictated if you mistakenly picked up, you excused yourself, apologized and hung up the phone. (except when the news was juicy, lol ! ha kidding !)  I remember gathering around the tv for the moon landing, Elvis live from Hawaii (both huge memories for me) and the tweaking of tinfoil and rabbit ears for good reception.  The advent of FM radio in the late 60’s early 70’s was orgasmic to a Taurus Moon (sensate art) girl with Saturn (rules hearing, in addition to Mercury) as chart ruler.  I remember listening to Beatles 45’s with my older sister (Ringo, if you were wondering; me- George) and this cool new swing-arm thinger that let us stack 45’s so we could hear 4 or 5 songs in a row– they would drop down automatically — one after another, so we could dance longer.  Amazing, huh !?  lol.  Fast forward to 24 hour Music television and I had a personal revelation, a second coming of sorts — music is huge for me with Neptune most highly aspected, and here it was, artistry multiplied – audio and visual – all day and night.  My parents literally had to drag me away from it every night.  I mean who cares about sleep (Neptune) when there is music television ?!  Fast forward to the internet and communication around the globe instantly, the people’s media – the worldwide university of thoughts and ideas accessible from the comforts of home.  Think about it – how cool is that !?        Now, I ask you, may we please may we observe a moment of silence for the ipod.         Dear goddess, the heavens parted and the angels sang – my entire music library grew from allowance money vinyl that filled several boxes to compact discs then onto a heavenly object that fits in the palm of my hand.  Yes it is compressed and not nearly as lush as vinyl, but still. in. the. palm. of. my. hand. WoW !  Then when MTV turned into whatever t.f. it is now NO MUSIC TV, sheesh, whatever – there was born in the eyes of some of my homeboys- Youtube.  Music video library, university courses, lectures, ufo sightings, the whistling language of Silbo Gomero, spitting goats, you name it- it’s up there.  I love it that I saw Radiohead, spent hours waiting to get out of the lot, drove home in the wee hours- and by the time I woke up the next afternoon – the show was already posted multiple times – in its entirety !  sswa -eeet 2x over mmm, yes ! Blessed be ye tapers, oh mani padme hum.  I recently had a shift in viewpoint when I bought an iphone — internet instantly in my pocket- snap !  Again, I am just WoWed by all these new forms of communicating and being Neptune girl, telepathy is next we all know it, it’s coming !

So you are gathering communication is a biggie for me, yes..?
(I would have done Helen Keller’s chart by now if I had the correct birth time, and I may yet anyway – she is one of my sheroes)
~~~~~~~~~~
Camp Mercury
The ascendant at the time of the eclipse is diligent, work and service – oriented Virgo, making Mercury chart ruler.  Mercury is closest to the eclipse point at the time of eclipse and rules the Ascendant (identity) and Midheaven (peak experience, and how we use communication).  What and how we communicate is paramount to who we are in this chart personally and globally.
Mercury is conjunct (power operating) Venus (love, kindness) and sextile (opportunity) Saturn (justice, tact, discipline).
Mercury is also Quintile (gifts of spirit) Chiron – the healer, philosopher and teacher.

Mercury retrograde at the time of eclipse, hand in hand with Venus is giving communication a vibe of Peaceful Resistance.  Mercury squares (inner tension) the Ascendant or the vibe that is put in the world from the visionary sign of Sagittarius.  What is ethical speech, what are the consequences of what we say to one another ?

Camp Chiron
Virgo Ascendant with Chiron as ruler placed in the sign of spiritual intelligence, idealism and divine harmony is squaring (inner tension) the eclipse point.  We as a people feel (Chiron conjunct Neptune opposite Mars in Virgo the fighter for the little guys) we are not being heard – worldwide – but with the Quintile to Mercury, rest assured, We Are.  We hear one another loud and clear.

Listen to the end and hear the call of the Sagittarius eclipse approaching…this page got 21 new comments in nearly as many seconds, and if you google UC Davis you will get more police brutality against peaceful protesters.
I find this very disturbing.
Mars (force) is in a T-square (imbalance) with the eclipse, and Uranus is square Pluto – that’s a wildcard…ponder that and you be the judge.

In addition to the above, congress wants to enact censorship on the only people’s media (front lines reporting from the people on the street via camera phones etc. ) available to us in the face of bought and paid for cable networks and their biased (non) reporting of events.  See below.
~~~~~~~~~~~~~
At the time of writing, US Congress is considering two bills, the PROTECT-IP Act (PDF) and the Stop Online Piracy Act (SOPA) (PDF). Some of those in the media industry argue that the acts, which will allow an unprecedented level of internet censorship under US law that will impact on the web worldwide, are necessary to protect jobs.

Opponents argue that the bills could turn the internet into a glorified version of cable TV and destroy innovation. Tumblr has been active in encouraging its US users to call their representatives and argue against “using the same domain blacklisting technologies pioneered by China and Iran”; elsewhere, an open letter also sent to Congressional leaders has been co-signed by AOL, eBay, Facebook, Google, LinkedIn, Mozilla, Twitter, Yahoo! and Zynga, all of whom rarely agree on anything else, which says a lot.  Click here for entirety.
~~~~~~~~~~~~~~~~
I am not here to forecast doom and gloom, only to spread the word, and let you decide for yourself.

I would like you to keep in mind this partial solar eclipse is a new moon and is the time for planting seeds that will be harvested when the moon is full on December 10th, 2011, which is also a full lunar eclipse.  (more on that later)

Solar is ego, ambition /  lunar is instinct and emotions.
November eclipse will activate the solar / December, the lunar.

Be mindful of your thoughts, focus on the positive.
Be love.

On December 10th, we not only have a full lunar eclipse at 18 degrees of Sagittarius, but also Uranus direct.
That will shake things up a bit, I am thinking.

If your actions grow from a loving heart, then loving fruits your actions will produce and  multiply.
Blessed be.