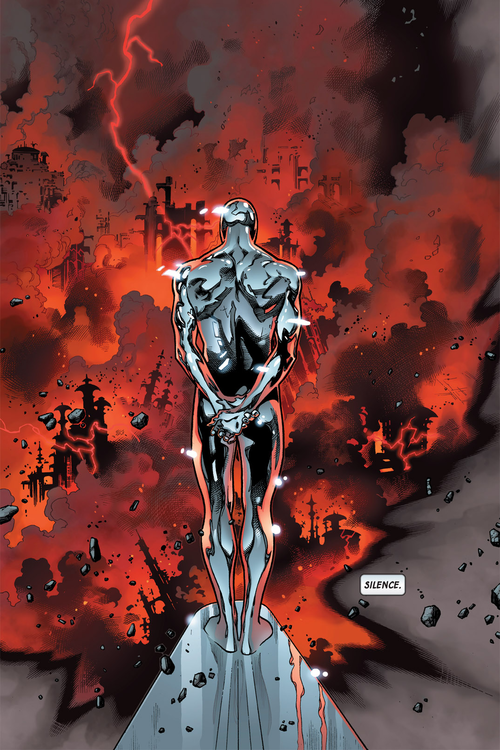 Silver Surfer is one of the most conflicted, tormented superheroes in the Marvel Universe.  Raised in a utopian society, he grew disillusioned, he craved adventure, challenge and struggle.  When the evil planet-eating Galactus threatened his home, SS saved his planet from destruction by making a deal and becoming his herald.  Silver Surfer became the harbinger of doom for other worlds…until the kindness of a woman led him to defect in order to save earth.

Mars in Libra has a hard time of it.
Outgoing Mars expressions naturally fire on all pistons ALL for ONE.
Libra instead, maintains a pause to consider OTHERS before moving. The scales of balance get quite a workout with this placement – instincts aware of partnership where the rubber meets the road.  Venus attracts, Mars repels – the volley of juggling energies can become frustrating, though ultimately stronger when harnessed to work together.

Throwing kit and caboodle headlong into diplomacy is the best way to work this Mars.   Justice becomes Just US, opening options and maintaining open lines of communication is key.
The hand of Libra smooths and soothes the sharp edge of the blade, she is the iron fist in the velvet glove. Choices considered, should be – Mars does not wait; Libra will make him do so, like it or not, in order to make the best reasoned descision.

Bombing for peace is like screwing for virginity.
::: Vietnam protest slogan attributed to Emma S. Riches :::

Meeting above us are Libra Mars square Capricorn Venus in retrograde.
Work, bonds, time, structures, bodies, bones, love, money, goals and conservation are getting the once, twice, triple-time over.   Reinvention, reinvigoration, in some cases resignation will apply to this Venus transit.  Time to lay it to rest, deader than a hammer, the beaten dead horse…?
Only you know – this square is about what’s going on inside.

Mars square Venus adds up to applying force to find personal balance, peace of mind and co-operation with the part of ourselves that needs to MAKE THNGS HAPPEN.
NOW
It signals developing self-confidence, reliance and keeping one’s own counsel – as well as cultivating a sense of when to bust out of the gate – socialize and mingle.  The attractive, magnetic qualities of Venus light a fuse under drives and desires – we work hard to create our personal best in all realms.

We are sparks kindling magic wands of fire in our own heads under this aspect.
Fireworks in a bright shiny package, bigger on the inside, flying headlong into creating and fighting for what we love.