Achilles, the demigod (half god, half human), son of Nereid (sea nymph) Thesis, and Peleus, the king of Myrmidons – was the greatest warrior of the army of Agamemnon in the Trojan War.  Achilles is most known for the Battle of Troy, where he slayed Hector, the eldest son of Kim Priam of Troy.

The demigod was defeated by Hector’s brother, Paris, when an arrow guided by the Sun God Apollo impaled Achilles in his only weak spot – his heel. 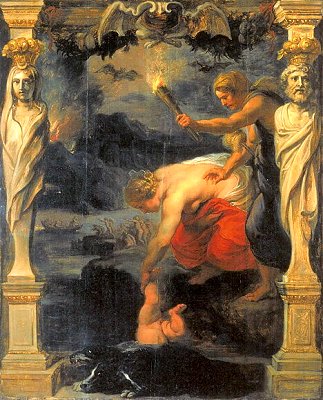 When a child, Achilles’ mother, Thetis, dipped him in the waters of the River Styx, by which he became invulnerable, except for the part of his heel by which she held him – the proverbial “Achilles’ heel.”

The Achilles tendon connects the calf muscles to the heel bone – together these muscles produce a foot action that is basic to walking, running, and jumping.
The Achilles tendon is the thickest and most powerful tendon in the body.
If the tendon is cut, use of the leg for running or jumping is lost.

This I have discovered, is where I have more, extra special, Saturn (satan?!) growth.  My pixies are pitching sands and pebbles instead of fairy dust & glitter. haa  Saturn Rx transit on natal Neptune in 11th (natural house of Aquarius – ankles) and I can barely walk by the end of the day due to bone spurs jangling my tendon as I walk, so I looked up the astro.

Currently: Achilles Rx at 10 Libra putting it squarely in the Cardinal Cross – squaring Cancer Jupiter and Capricorn Pluto by degrees – squaring Sun/Uranus in Aries.  Venus is in good aspect to North and South Node; applying semi-square to Sun in Aries.
Cautiously ease friction between intellect, love and actions.

2 thoughts on “satan on my heel”