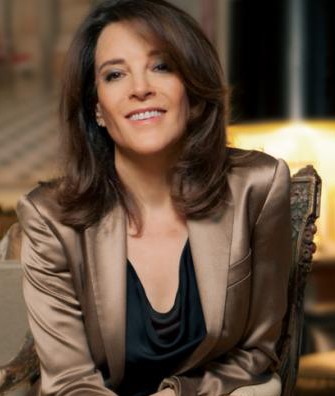 This woman is unusual.
A self-proclaimed ‘bitch for God’, Marianne’s obviously a woman after my own rebellious heart.  After all, the god/goddess does have a sense of humor (Venus), and I do love a good smartass who doesn’t get all precious and up themselves about spirit.
I’m in !

Marianne has a whammy Cancer stellium: Sun conjunct Uranus and Venus – there’s the rebel streak.  Venus opposes disseminating Moon in Capricorn by a wide nine degree orb, by transference of light – they all do. Yes I give more orb to luminaries, particularly with a Cancer (moon-ruled) stellium and Moon being at highest elevation.
Venus in 2nd opposing Moon delivers money/success via the public.

Uranus rules her North Node of Destiny in the 9th of philosophy/publishing and she has published ten books, including four New York Times #1 bestsellers.  She’s a relaxed (mostly, see bitch for god), boho spiritual guru seeking enlightenment,  exploration – and we all get to ride shotgun on her journey.

Saturn and Neptune (spiritual work) in Libra square Cancer stellium delivers the impetus to create balance and justice via healing through public work.  (Libra/public, but also Neptune square Moon elevated by orb of 10)

She’s a fabulous engaging speaker with Mercury and Pluto in Leo (drama, power, captivates).  They square Jupiter in Taurus 11 (Placidus) – make no mistake, she has control of the reins – fixed twice over when square to fixed Leo.  Soft voice, a patient teacher, packing tremendously powerful insight.

She has Mars in Scorpio (applying out of sign) square Capricorn Moon, the uncanny ability to provoke transition by delving into common human fragilities, fears and struggles.  She knows them intimately because she has lived them herself.

Marianne shows us how to rise above via love/understanding, she teaches us to see how we are kindred in our basic humanity, the need to be valued and loved.

postscript for all my bitches:
Bitches = Being In Total Control of Herself.

9 thoughts on “Bitches for God”