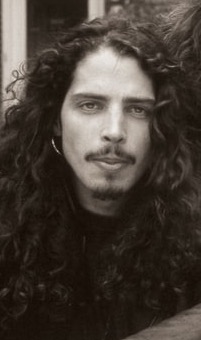 Chris Cornell died (police report suicide by hanging, his family disputes this) after his recent Detroit show on Wednesday at the young age of 52.
Incredibly talented man with an unforgettable voice.
Huge Syd Barrett fan too.
Syd is my (primary) patron, so it occurred to me he might have been around to help Chris with his transition, so I asked him.

What follows is a series of Q&A using various card methods – the draw and answer follow the questions.  Lastly, I of course, tackle the astrology.

? Chris what was going through your mind the night you died ?
1 Eligor: (Venus) conflict/warfare and strategy; rise or find someone who can
2 Orias: (Moon) inspiration/Hermes, thoughts beyond logic, instinctual responses
3 Bifrons: (Mars) new chapter/transformation, death

Seems he was at war with himself, felt he had no way out than to go higher.

? Chris, now that you are on the other side, what say you ?
Be wary of quick decisions that lead you into the cave of the unknown, rather be generous when judging yourself, disappointment will pass. Turn your creative eye towards those who love you and seek emotional adaptation and wise counsel to assist you as you conquer your demons.

Syd, do you have any parting thoughts ..?
Thanks for hooking me up with your (our) friend, I told him you send him your love. Share this caution to the spooked herd. Rise above the pain and drama and know that his energy remains, infinitely enfolding. Though he lost this challenge, he will, in time, rise again with strength to face the next. 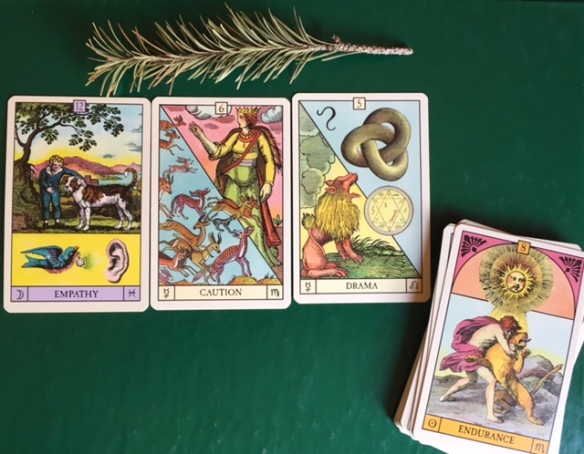 Natch, I also checked the astro.
Chris has an unaspected Cancer Sun (Moon rules Cancer, fluctuates) which was under a progressed Mars transit (conjunct).  This is a call to courage, strength and willpower – a need to release tension properly lest a risky gamble backfire in the heat of the moment.

Unaspected Cancer Sun often has deep feelings that may go unexpressed due to feeling alone and singular in expression. Releasing pressure for an unaspected Sun is more difficult when it doesn’t ‘relate’ to other planets in the natal.

Progressed Virgo Mercury Rx was opposite his natal Saturn Rx in Pisces, which can indicate mental stress, fatigue, and a resultant overmedication. Thoughts become jumbled in the face of reality. Work issues may seem insurmountable or insecurities may begin to run the whole the show.

In addition, not only was transiting Mars conjunct his natal Venus/Mars conjunction in the mental sign of Gemini which points to heightened anxiety, but also transiting Uranus the eccentric was square his natal Sun. Chris took Ativan to combat this anxiety which is a part of his natal signature.  (So do I.)  It is reported he grew confused after taking too much which led to his death.

Rest In Peace, Chris
You will be missed by so, so many.
Oh…and when you get a chance, please tell Syd I love him. Thanks love x

Sun is dependable in Taurus

Valued for reliability and modest self-esteem
they radiate peaceful charm

Scorpio Suns are fond of power
in whatever form it takes
molding, shaping and manipulating it is their forte

in the absence of chaos they wield it
a steady sword need be tested, tried to be true
transformation is inherent, relentless

Sunshine in Aries is exalted

Will powers rise
blazing with desire and confidence to conquer all

Impatient to get on with it
they are single-minded, determined
expecting others to
lead, follow or get the hell out of the way

Balanced justice and creative thinking strive to create harmony
bonds are forged, friendships solidified
spotlight shines on the other

Charm dictates and magnetism is strong
merging through love is pleasurable, preferable and poetic

Social grace and intellectual generosity
invites comrades and enemies alike
they are above all, fair

Unpredictable outbound energy is the hallmark of this aspect.

Mars conjunct Uranus is wildly courageous, bold and headstrong – contrary even.  This team is leading the way come hell or high water, they will not be stopped, corralled or worse yet – managed.

Fiercely independent, they are extreme in whatever they choose to throw their energies into, no one will convince them otherwise.  Forward actions & fixed mindsets are all over the shop.

Willpower, thought processes aka altitude attunement is of utmost importance, for getting the head straight prior makes all the difference in how the game is played.  Mars conjunct Uranus has incredible wild instincts and KNOWS how to react to social situations no matter how odd the crisis or sitch.  They jump right in without thinking, this is an aspect of action/reaction for better/worse.

This combo points directly to humanitarian interests, they are often spoiling for a good cause/fight to rally behind.  These intelligent reformers are audacious and ardent with the ability to view life with a detached objectivity, making them very perceptive champions in a pinch.

Mars conjunct Uranus signals a strong-willed, domineering competitor who is not only intuitive, inventive and clever but also packed with stamina for the long haul.  They are rebellious, resourceful and highly focused. 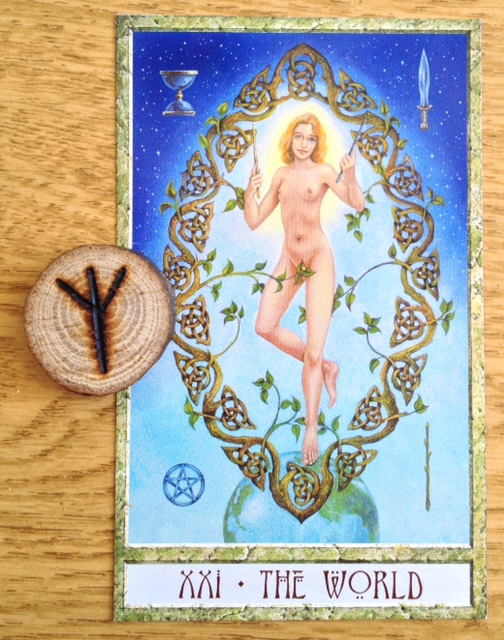 Druid Craft
Rune made by my hands from an oak on my property.
Fond of Acorns, Oaks, Druids and asteroids ?
Read Draw the Stroke.

Today’s quick pull is to shed light on the hidden aspects between this full Virgo Moon and the incoming Solar Eclipse at 29 Pisces here.
I have particular interest (my Sun is opposite at 29 Virgo) but this question is for everyone.  I chose to shine a light around the corner into what we cannot see but need to between these aspects.

The World:  Fulfillment, completion and dancing for joy because of it !

This I find so interesting…because our lives go ever on and on, the learning continues and space opens up with each generation.  Pisces knows no boundaries, nor Virgo if they nitpick projects to death.

Completion is relative.
To be precise: we have completed one phase of many.

So much we do not know – SO MUCH !
Yesterday, a fossil was found in Ethiopia which pushes the arrival of Homo on the East African landscape back almost half a million years, to 2.8 million years ago.
Even at that, the human lifespan is just a blip on the timeline of Earth and even less so in regards to Precession of the Equinoxes. < Watch, stunning.

Rune: Algiz
An elk, a shield – protection.
This rune symbolizes a connection to the Gods, an Awakening.
Call on yours if you need to.

Follow your instincts and channel energy into crafting your shield.
Whatever that means to you.

Hi qi manifestation of this eclipse highlights the unseen, sneaking and strategy.  Pisces Sun conjunct Moon Solar Eclipse in the last degree (29) of the last sign of the zodiac (Pisces) is stealth in the twelfth without a doubt.

Caution is advised, an oblique approach to any and all difficulties is better received than full frontal guns blazing.

This Quantum card reveals different forms of radiation, aka atomic nuclei that are unstable and release particles spontaneously.  All forms of radiation are silent/invisible though they do not operate the same.

This card signals scheming and penetration, the indirect approach.  Many situations will be sneaking up on us – calmly  calculate and consider all circumstances flowing inward & outward.

We spy but are also spied upon.
Carefully contemplate boundaries – those you set & those you break.  Where are you permeable, where are you rock solid…?  Know your deal breakers.

Treat others as you would like to be treated & treat yourself well while you are at it.  Management of the mischievous Pisces savior/martyr complex is a must.

This is the culmination degree of an intuitive, compassionate, sign.
Healing comes home.
How healthy is your (Earth’s) body of water ?

What we create we live with: energy, thoughts, feelings and vast amounts of miscellaneous material goods.  Eg. There is no such thing as throwing trash away.
Hidden means hidden – not gone or away.  Garbage (energy) ends up in a landfill, (in someone else’s face) quite a bit of it is sadly floating in the Pacific.

Transmutation of Use is the Key.
Consider this – personally, globally. 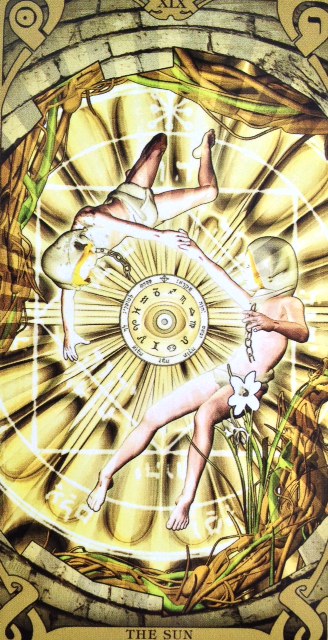 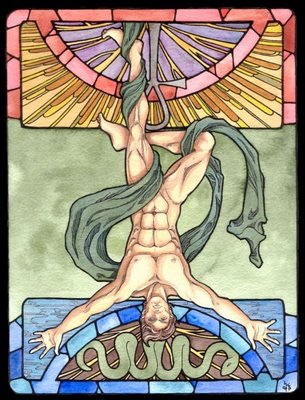 9
Nine is ruled by Mars and Pluto.

Symbolism /mythologies of the number nine include: 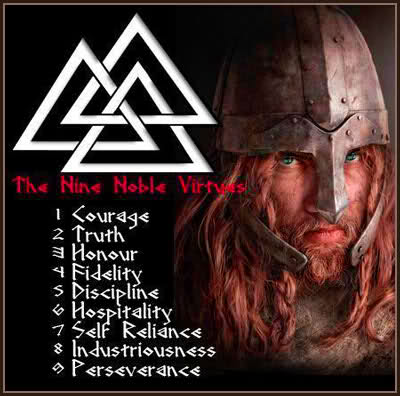 City of Nine Gates
Nine months of human gestation
In human gestation, the sperm tail has nine twisted threads, which after uniting with the egg form a centriole which is a circle of nine parallel tubes.

Nine Ring-Wraiths & The Fellowship of the Ring. <~ Yes, ALL 9 + interest.
Nine sacred woods of Beltane
Nine is the triple triad of 3×3, the Triune of the Goddess

In Kabbalism, the ninth sephiroth of the Tree of Life is yesod aka the magickal link between mind and matter, the foundation and support of our existence, a great fundamental force for good/evil/transformation. 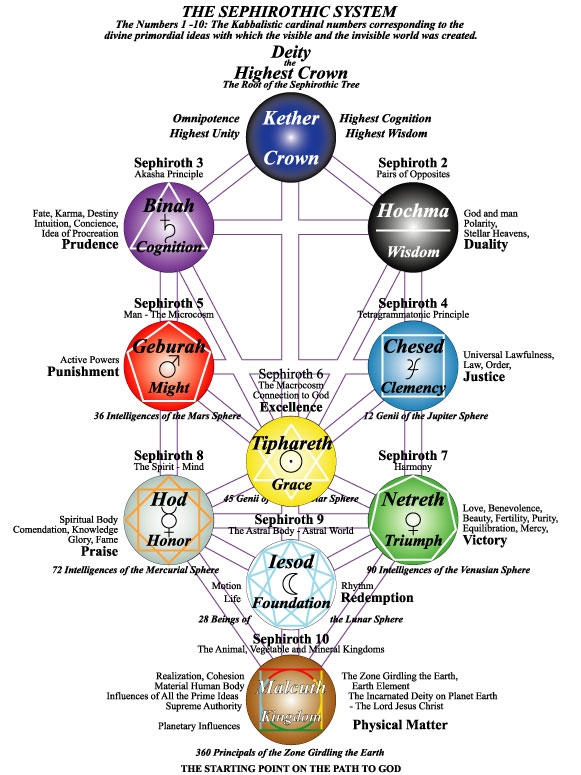 Nine is unique in being the only digit which, when multiplied by any other digit, always reproduces itself – for this reason, nine symbolizes indestructible matter and immutable truth.  Nine is the number of spiritual and mental proficiency, the root of all things.
Nine is the number of the circumference (circle), divisions of 90 degrees create 360 degrees for the entire circumference.  (see sacred geometry video, GMA fb page)

Nine is a dense composite of vibrations of all the numbers before it.  Aces are pure energy (see Robin Wood pic below) opposed to the slower, textured energy of the nines.  See how short and sweet the interp for one is here.  Arriving at the point where I could write the interpretation for nine took considerably more effort than it did when I was writing one, I guarantee you.

Nine is attainment, achievement and the ending of a cycle as the next number (10) is again reduced to 1.  Nines carry the energy of calculation prior to culmination.  Nines are knowledgeable masters and visionary leaders capable of great influence on their environment. 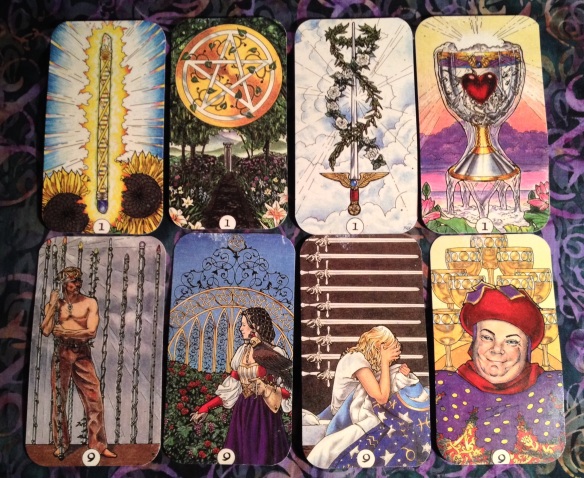 Generous to a fault, these idealistic humanitarians sacrifice money, time and energy to improve the welfare of all.  The vibration of nine is equipped to be responsible for more than themselves, they carry a heavy burden for many.  They are selfless, tolerant and philosophical rather than materially focused.  Nines are open and understanding of many walks of life – knowledge coupled with compassion reigns supreme.

Self-awareness is the signature of this vibration, they have lived through the energetic expressions of numbers 1-8. These folks teach life’s lessons, have great empathy and dedicate themselves to helping others succeed through counseling, mentoring and the healing or creative arts.  Serious students of life, they have an amusingly eccentric edge and are often gifted with highly intuitive powers due to energy recognition/transmission.